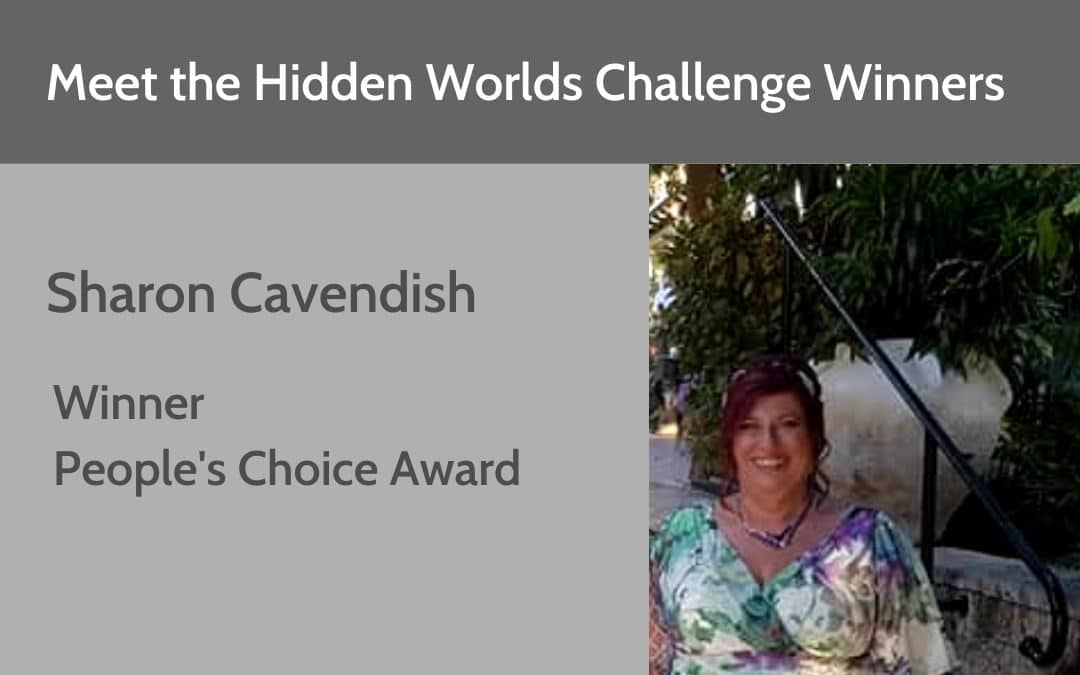 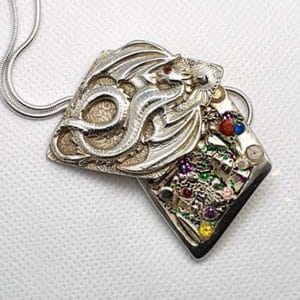 When Sharon saw the title of the Hidden Worlds Challenge, she immediately thought of the dragon Smaug from The Lord of the Rings, with his hidden treasure under the mountain. That inspired her to create her winning project, a silver swing pendant called Dragon’s Hoard.

“I initially tried to put the mountain and the dragon on the front,” says Sharon, “but that was too bulky so I chose to feature just the dragon. Omitting the mountain was probably a good idea, as without it, the piece still weighs in at a whopping 74 grams!”

“I learned so much doing the bottom of the swing pendant with the hoard inside. I wanted to remake it as I could see ways to make it better, but the deadline loomed so I fired it as it was.”

“I love that I can reconstitute metal clay if I make mistakes,” Sharon adds. “I am not a natural artist and have to make things several times to get them right. The most important lesson for me was not to fire anything I’m not happy with – just reconstitute it and start again!”

Sharon’s winning project was an entry in the Beginners Category of the Hidden Worlds Challenge. She originally saw an advertisement for a silver clay course which intrigued her while visiting South Devon, but could not find it when she tried to book it later. When she returned to London, she was able to find a metal clay class and quickly became hooked. 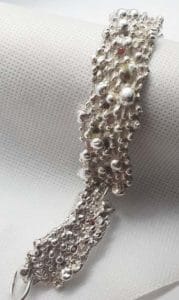 “I have had wonderful teachers; I have been to a variety of places to do workshops and have also completed online tutorials. Attending ‘You Can Make It’ just before lockdown was an absolute highlight; to be with so many wonderful, talented teachers and like-minded metal clay artists was a delight. I learned so much, made new friends, and was inspired to do even more.”

Currently, Sharon is experimenting with photopolymer plates, and is doing online tutorials during lockdown. “Inspiration usually comes from seeing something I like and making my own version of it. Often you would not relate it to the original, but somehow it inspired me to get where I am.”

“I like big and chunky jewelry,” adds Sharon, “so those are the pieces I love doing. I call the best piece I have ever made my balls and gems bracelet, a collection of different-sized balls stuck on, and balls pushed in to make ball-shaped dents, with lots of gems. It is big, chunky, organic, and different. I guess it is a compliment (but not one I would like repeated) that someone liked it enough to steal the first one I made so I had to make another one. Now it doesn’t leave my wrist unless I’m swimming!”