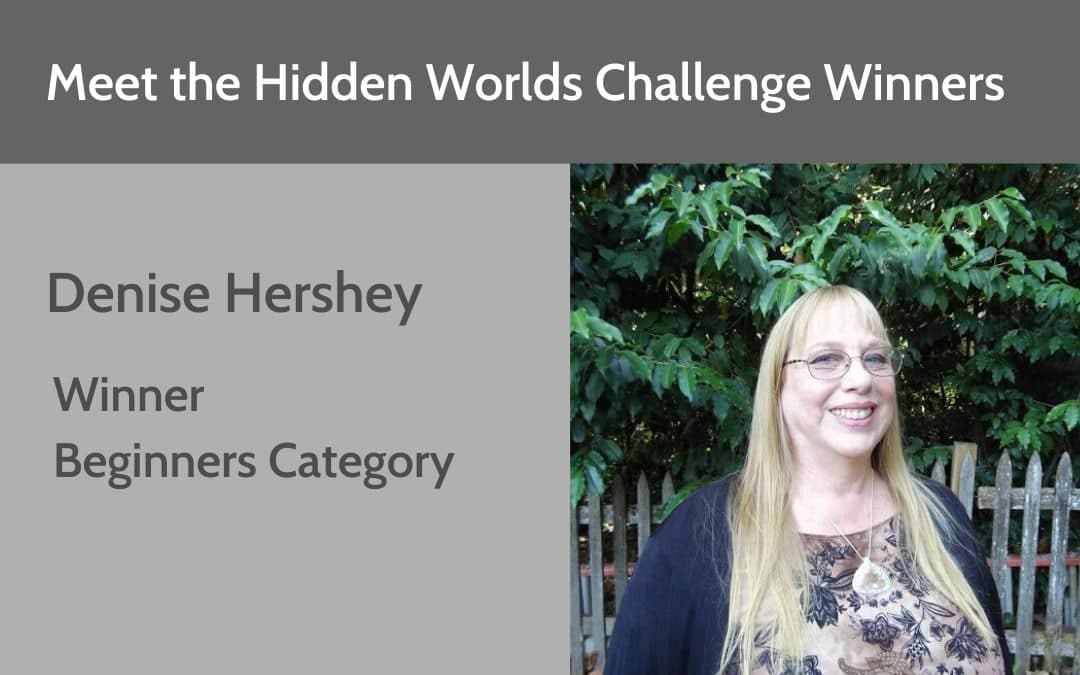 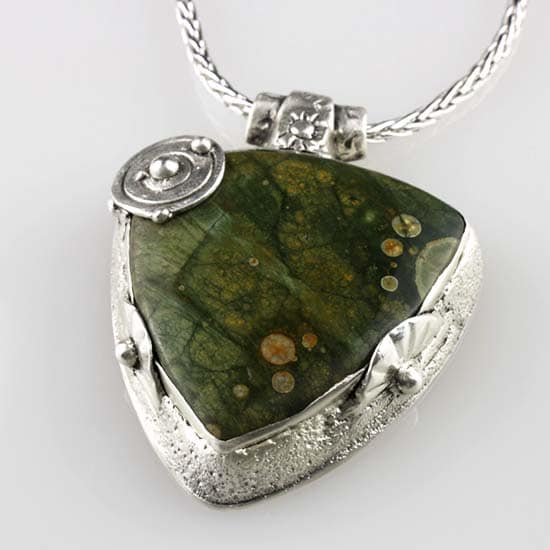 Denise’s winning entry in the Beginners Category began with her discovery of a beautiful rhyolite stone with inclusions that looked like little planetary systems to her.  An archaeology fan and self-described science geek, she began thinking about covering the corner of the stone with a little silver planetary system to accent those in the stone itself.

“I made the planetary system,” says Denise, ”but ran into all kinds of setbacks with the rest of the design. After many tries, I set it aside for months. That little planetary system was just sitting there on my workbench reminding me that I needed to finish it.”

“During this time, I made several more silver bezels for large semiprecious stones and I learned more about how to up my game. I bought Lisa Barth’s book, Designing from the Stone, and learned how to make the design before starting to work in clay. Up until then I had been seeing the design in my head and creating it from there.”

“I fully designed the piece, and although I had some challenges, it came out more-or-less as I had designed. The backplate kept separating from the bezel as I worked, and I ended up doing them separately and then putting them together. I had started with many more silver dots, but removed the majority of them when some popped off and I realized they were cluttering the design. The resulting pock-marked nebulous clouds really improved the look I was after.”

“When deciding what to put on the back, I was roaming around my house looking for textures. I found a souvenir from my first trip to Europe:  a stylized ancient round stone carving. I made a mold of it and it was a perfect texture for the back of the design. It really gave the piece a mysterious unearthly effect which I felt perfectly balanced the planet and nebulas on the front.” 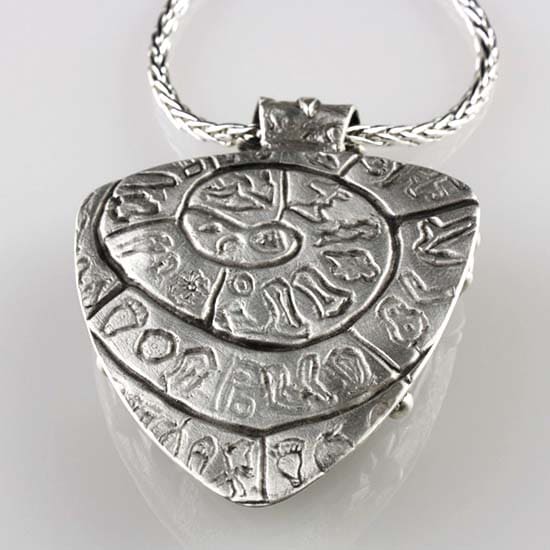 Denise was sculpting in red clay and porcelain in the late 1990s when she first heard about metal clay and filed the information away in her brain.  In late 2016, she had a little hobby business of beaded necklaces and earrings, and got the notion to add metal clay pieces to her work.  She got a starter kit, made a few pieces and joined some social media groups, but got side-tracked by several personal events.

In 2019, she picked up metal clay again.  She had rebranded her business as Gaia’s Song Jewelry, and focused on taking her work to a new level by designing her own toggle clasps and pendants, as well as setting the beautiful, large semiprecious stones she has been collecting.  Earlier this year, she took her first metal clay class and really began to learn metal clay as a medium.

Denise is inspired by the beautiful stones nature has created.  When it’s time for her to think about a new piece, she sits on the floor with her containers of stones and looks through their markings and shapes, imagining what kind of silver piece should contain it.  She’ll select a handful, see which one is calling her the loudest, and start the design process.  She’ll trace the stone, make designs, and proceed to templates.  “Often,” she laughs, “my design will shift, either due to unexpected and serendipitous results, or by inspiration as it unfolds!”